After living through more than two years of COVID-19, its variants, and the attendant supply-chain disruptions and inflation concerns, one thing is clear: Uncertainty is the only certainty.

We sat down with three Schwab experts to discuss their outlooks for U.S. stocks, international stocks, and bonds—with an eye toward actions investors might take in the year ahead.

The outlook: The S&P 500® Index ended 2021 up 27%—but that impressive gain belies a roller-coaster year. “More than 90% of the stocks in the S&P 500 experienced losses of 10% or more at some point in 2021,” says Liz Ann Sonders, Schwab’s chief investment strategist. This kind of churn under the market’s surface could persist in 2022, given the myriad macroeconomic forces at play.”

Perhaps the most pronounced of these forces is inflation, which in recent months has reached highs not seen since the 1980s. “Demand for goods—combined with pandemic shutdowns and supply-chain upheavals—has been the primary driver of inflation,” Liz Ann says. “These bottlenecks are expected to ease, but as we’ve learned, new COVID-19 variants could slow or curtail such progress.”

Inflation will also influence the Federal Reserve, which helped keep the economy afloat during the depths of the pandemic by slashing interest rates and increasing its bond purchases. The Fed has signaled it will end its bond-buying program and begin raising interest rates as early as the first half of this year, but persistent inflation pressures could accelerate the pace of both actions (see “Bonds,” below).

“Historically, stocks have performed better when the Fed has increased interest rates slowly in the first year of rate hikes,” Liz Ann says. “Faster rate hikes, on the other hand, have historically been accompanied by weaker returns.”

Stock market performance has historically benefited from a slower approach to rate hikes in the first year of a new rate-hike cycle. Source: ©Copyright 2022 Ned David Research, Inc. Further distribution prohibited without prior permission. All Rights Reserved. See NDR Disclaimer at www.ndr.com/copyright.html. For data vendor disclaimers, refer to www.ndr.com/vendorinfo/. Data is indexed to 100 at date of first Fed rate hike. Past performance is no guarantee of future results.

Another important variable in the year ahead is labor force participation, which remains well below its pre-pandemic peak. Meanwhile, job vacancies remain near their highest levels since at least 2001.

“Between virus concerns, early retirement, and a desire for better work/life balance, job openings are likely to remain elevated in 2022,” Liz Ann says. “However, higher wages—which have already jumped by more than 4% year over year—may eventually lure hesitant workers back into the job market.”

The actions: Particularly during times of uncertainty, diversification across—and within—asset classes and sectors is of paramount importance. Given the expectation of continued bouts of volatility, especially at the sector level, resist the temptation to try to predict sector leadership and instead focus on shoring up your stock portfolio’s quality characteristics.

Finally, periodic rebalancing—that is, adding and trimming positions to bring your portfolio back in line with your target asset allocation—is another way to ensure you don’t assume more risk than you bargained for.

The outlook: After dipping to historically low levels in 2020, global gross domestic product (GDP) rebounded in 2021, reaching its highest growth rate since the early 1970s.

“Much of that expansion was the result of effective fiscal policy and, of course, vaccines, which allowed most economic activities to resume in some capacity last year,” says Jeffrey Kleintop, Schwab’s chief global investment strategist. 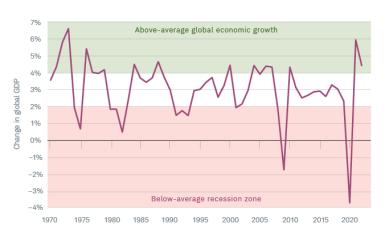 Source: Charles Schwab with data from the Organisation for Economic Co-operation and Development and the International Monetary Fund, as of 01/27/2022.

Global GDP is expected to jump another 5% in 2022, fueled by additional support from central banks and the pent-up savings by businesses and consumers.1 “If global GDP delivers on that growth, it will form the strongest back-to-back years for the world economy in five decades,” Jeffrey says. “That should provide a sizable cushion globally against the downside risks of inflation, interest rate hikes, supply problems, and even COVID-19 surges.”

Europe, in particular, is entering a new era of fiscal policy. “The decade following the financial crisis of 2008–2009 was marked by austerity measures in Europe,” Jeffrey says. “But in the aftermath of COVID-19, lawmakers are adopting a policy of abundance by expanding budgets well beyond what we’ve seen in recent years, which should be a boon for the continent’s economy—at least in the short term.”

In China, where growth is expected to slow, policy support for green technologies, semiconductors, and other favored industries could help bolster the economy. More broadly, export-reliant emerging-market economies typically benefit when global growth is above average. However, such economies could encounter significant challenges in the second half of 2022 if the supply shortages that plagued 2021 turn into gluts.

The actions: Again, there’s no substitute for diversification. Some countries have been more successful in their economic-stimulus and virus-mitigation efforts than others, particularly given the inequitable access to vaccines.

As such, it’s generally wise to diversify via a broad-based international exchange-traded fund (ETF) or mutual fund that can provide access to dozens if not hundreds of companies across countries and sectors. You can search for funds by logging in to schwab.com/ETFscreener or schwab.com/fundscreener, selecting Fund Category under the Basic Criteria dropdown, then selecting International Equity.

The outlook: Bond investors had a rough 2021. The year started with a surge in yields thanks to a faster-than-expected reopening of the economy, but rising COVID-19 cases in the late summer months, followed by the Fed’s announcement in November that it would begin dialing back its pandemic-era policies, triggered a subsequent plunge.

Indeed, the Federal Reserve has already begun reducing, or “tapering,” its bond purchases, which could be completed this spring. The central bank also has indicated that it could hike rates soon after tapering ends, as well as potentially begin to reduce the size of its balance sheet. That’s a significant shift in its policy outlook compared with last year.

Fast action by the Fed to counter inflation pressures could mean that inflation expectations begin to ease in the first half of this year,” says Kathy Jones, Schwab’s chief fixed income strategist, “but it also could cause higher volatility in the riskier segments of the markets that have benefited from near-zero interest rates and high levels of liquidity.

Meanwhile, the Congressional Budget Office expects GDP to increase in 2022, which suggests there is room for longer-term Treasury yields to rise. “Ten-year Treasury yields have exhibited a close relationship to potential GDP,” Kathy says. “With the economy poised for stronger growth, we believe the 10-year Treasury yield could move up to as high as 2% this year.” 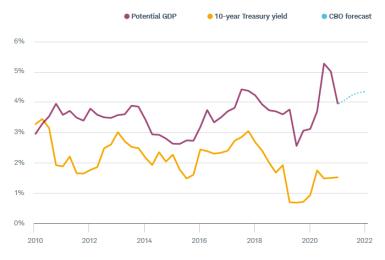 Looking abroad, the central banks in many developed countries also are moving away from pandemic-era policies. Norway and New Zealand, for example, have already begun raising interest rates, while Canada ended its bond-buying program in October. “The pace will likely vary, but the overall trend of central banks around the globe is toward tighter monetary policy,” Kathy says.

The actions: As central banks adopt tighter policies and yields move higher, consider looking for potential opportunities to add to your intermediate- and long-term bond holdings.

In particular, a bond ladder—in which you buy bonds with staggered maturities and reinvest the proceeds in new bonds as each one comes due—can be an effective way to increase the yields in your portfolio over time.

We also suggest a more careful approach to the riskier segments of the market, such as high-yield corporates and emerging-market bonds. While current credit conditions are still positive, a rapid series of rate hikes could cause a sharp decline in prices as less risky assets begin offering higher yields.

“Whatever challenges 2022 might present, taking a disciplined approach to your investments is almost always the best path through uncertainty,” Liz Ann says. “That discipline should involve diversification—across and within asset classes—and periodic rebalancing.”

That said, investors should remain alert to factors such as inflation, monetary policy, and ongoing virus concerns. “You won’t be able to insulate your portfolio from every bump in the road,” Liz Ann says, “but adopting a strategy that’s based on thorough research and good portfolio hygiene should make the journey a little smoother.”

Indexes are unmanaged, do not incur management fees, costs, and expenses, and cannot be invested in directly. For more information on indexes please see www.schwab.com/indexdefinitions.

Forecasts contained herein are for illustrative purposes only, may be based upon proprietary research, and are developed through analysis of historical public data.

Diversification, asset allocation, and rebalancing strategies do not ensure a profit and do not protect against losses in declining markets. Rebalancing may cause investors to incur transaction costs and, when a nonretirement account is rebalanced, taxable events may be created that may affect your tax liability.

A bond ladder, depending on the types and amount of securities within the ladder, may not ensure adequate diversification of your investment portfolio. This potential lack of diversification may result in heightened volatility of the value of your portfolio. You must perform your own evaluation of whether a bond ladder and the securities held within it are consistent with your investment objective, risk tolerance, and financial circumstances.