Bollinger Bands®: What They Are and How to Use Them 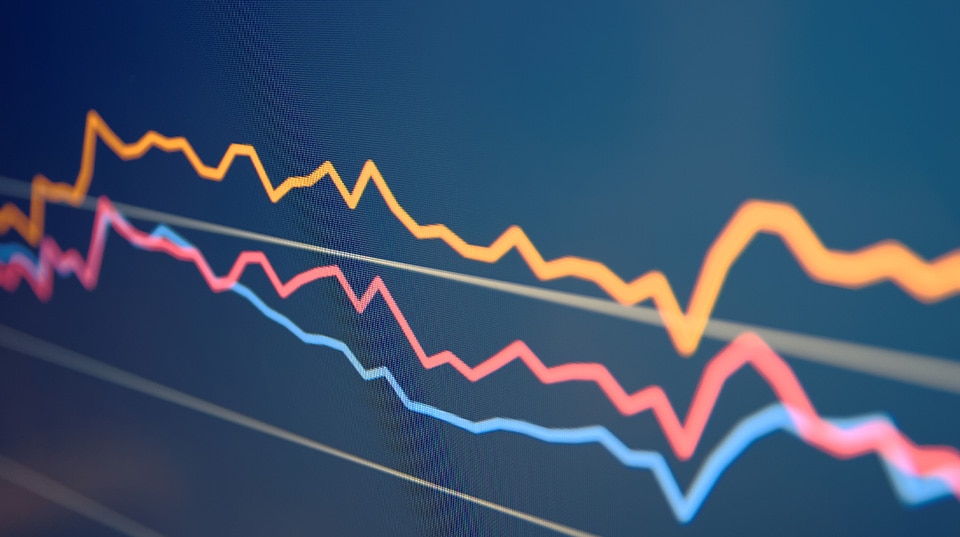 Flexible and visually intuitive to many traders, Bollinger Bands® can be a helpful technical analysis tool. Invented in 1983 by John Bollinger, they’re designed to help traders evaluate price action and a stock’s volatility.

Before we get to how they can do that, let’s talk about what they are and what they look like. A Bollinger Band consists of a middle band (which is a moving average) and an upper and lower band. These upper and lower bands are set above and below the moving average by a certain number of standard deviations of price, thus incorporating volatility. The general principle is that by comparing a stock’s position relative to the bands, a trader may be able to determine if a stock’s price is relatively low or relatively high. Further, the width of the band can be an indicator of its volatility (narrower bands indicate less volatility while wider ones indicate higher volatility). 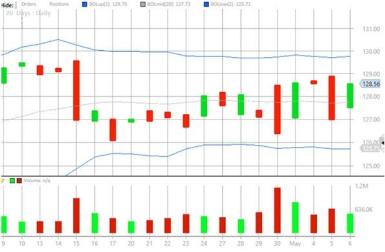 Figure 1: Bollinger Band activity over the course of 20 days.

Before we discuss how to use Bollinger Bands, it’s important to note: When the price touches the upper band, it doesn’t necessarily mean that you should sell. Similarly, when the price touches the lower band, it doesn’t necessarily mean you should buy. In fact, take it from John Bollinger himself who said, "There is absolutely nothing about a tag of a band that in and of itself is a signal."

Prices can “walk the band” during a strong down- or uptrend. This means that there are repeated instances of a price touching or breaking through the lower or upper band. That’s why you may not want to take action when the price touches either band—you might, instead, prefer to wait and look for chart patterns like the “double bottom,” a “classic M top,” or a “three pushes to high” formation. Let’s talk about these chart patterns more:

To identify a double bottom, look for a price that has touched the lower band and wait to see where the next low occurs. A price that reacts and rises close to the middle band, followed by a second low inside the lower band, suggests that the price is positioned for an upward move—a good time for traders to buy. 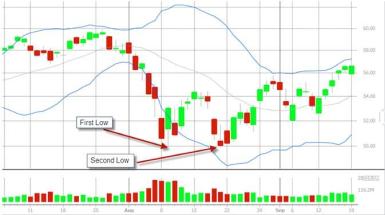 Figure 2: The double bottom on display.

The classic M top is formed by a push to a high, followed by sell-off reaction, and then a test of the previous high. The second high can be higher or lower than the first high. Watching the price behave like this, a trader may wonder if the stock is in a new uptrend, or if it has met its resistance. The Bollinger Band may help to answer this. Figure 3: This classic M top shows how a second high can be both higher than the first, yet still within the upper band.

This scenario may be a reliable indicator of decreasing momentum. With it, you may notice there is also decreasing volume. 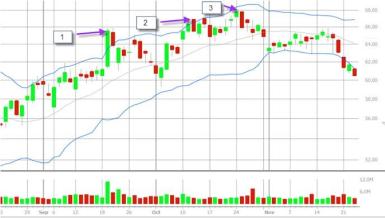 Signaling the starts or the ends of trends

Bollinger Bands can also indicate the end of a strong trend. Strong trends, especially those developing after a breakout of a trading range, will result in an expansion in volatility that will cause the bands to initially move apart. This means that in a strong uptrend, the lower band will actually move downward in the opposite direction of the new trend. When the lower band turns back up, it can be a signal that the move higher might be over, at least for a while.

Another interesting use of Bollinger Bands is based on the observation that volatility tends to be mean-reverting: Periods of low volatility are generally followed by high volatility and vice versa.

Narrow bands indicate a squeeze, which means that volatility is low. But remember, since volatility is mean-reverting, the bands will probably expand, signaling a potential for an explosive move. A simple way to spot a squeeze is to identify when the bands are the narrowest they have been for the last six months. 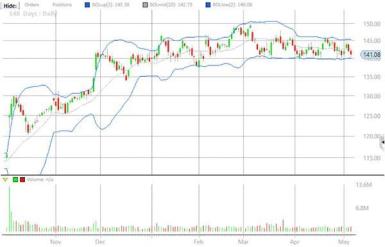 Figure 5: The Bollinger Band shows a squeeze, which could signal more volatility ahead.

If you’re looking to go long when trading a squeeze, consider placing a buy entry point above the upper band. Once it’s executed, you could place an initial stop under the low of the breakout formation or under the lower band. If you’re shorting, you could place a short sell entry point below the lower band in the squeeze area and, once it’s executed, consider placing your initial stop over the high of the breakout formation or over the upper band. Remember to adjust your stop orders as needed, or consider using a trailing stop designated in either a fixed dollar amount or a fixed percentage. Another method would be to use the parabolic SAR indicator  to trail your stop. Finally, to capture longer moves, you could consider exiting when the stock tags the opposite band (i.e., the lower band if you’re long, or the upper band if you’re short).

Pair with other indicators

Since Bollinger Bands are a pure price indicator, you might want to consider combining them with volume indicators for even more depth and insight. Ultimately, there’s no indicator that guarantees you’ll always get in at the bottom or out at the top. However, Bollinger Bands—especially when paired with other indicators such as chart pattern recognition tools—can help you make better trading decisions.

The information here is for general informational purposes only and should not be considered an individualized recommendation or endorsement of any particular security, chart pattern or investment strategy.