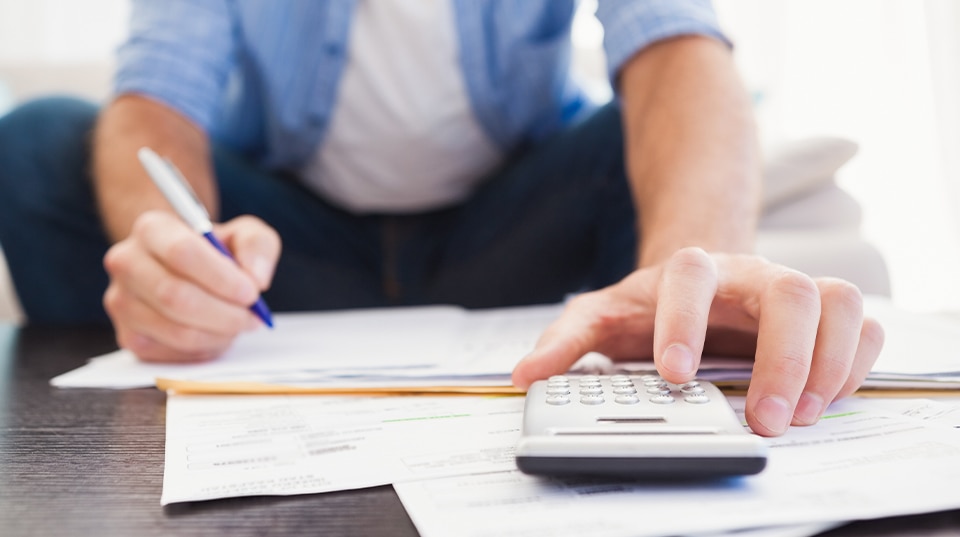 When you’re trading options, it’s important to know what’s at stake. What is your maximum gain, maximum loss and breakeven price on a particular options strategy?  An options profit and loss calculator can help you analyze your trades before you place them.

In this article, we’ll review the Trade & Probability Calculator, which displays theoretical profit and loss levels for option or stock strategies. It helps you determine the likelihood of a strategy reaching certain price levels by a set date, using a normal distribution curve.

Where do I find it?

The Trade & Probability Calculator is available in the All in One trade ticket on StreetSmart Edge®, as shown below. 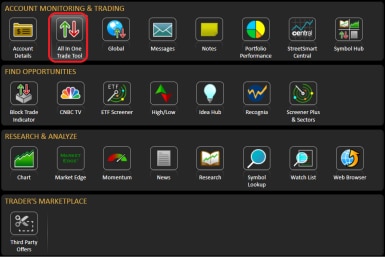 How does it work?

To get started, you'll want to select the Trade & Probability Calculator tab (shown in the red box below). Then, you'll want to verify the following graphical default profit and loss (P&L) settings:

You can change these defaults by selecting a specific date for any of the three lines. You can also view the numerical probability of reaching a specific target, above and below the current price, by expiration. To do this, move the vertical slider bars with your mouse or enter prices for the lower and upper targets (shown in the yellow boxes below).

All option pricing inputs can be changed, which allows you to view the price levels and probabilities that are most important to you. For example, you can edit the default implied volatility, dividend yield and interest rate settings to see how this might affect the outcomes, both numerically and graphically.

Follow this example of how the Trade & Probability Calculator works in action:

Let's suppose you are considering the purchase of 1 IBM 11/15/2019 145 Call at a price of $3.50, when the price of IBM is $140.92 (as shown in the screenshot above). The following numerical calculations (shown in the purple box above) are done automatically:

The maximum gain for long calls is theoretically unlimited regardless of the option premium paid, but the maximum loss and breakeven will change relative to the price you pay for the option. These values are also automatically calculated for many other option strategies, although the formulas are different.

Now, if you select the Trade & Probability Calculator tab, you will see the following additional calculations are done automatically and displayed graphically (shown in the green boxes above):

The profit and loss calculations (shown in the blue box above) for the date of entry (see orange line below), the half-way point (see blue line below), and expiration (see purple line below) are estimated assuming the price of the underlying stock remains unchanged from its current level. In this example, the 145 calls are out of the money initially, so notice how the loss increases as time elapses toward expiration; this is due to time value erosion.

You can click the Refresh button at any time to update the pricing inputs. 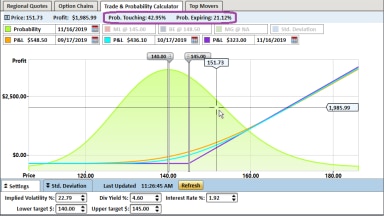 In addition, you can easily make the following calculations, which many option traders find useful: 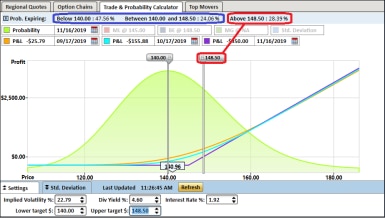 If you zoom in on the distribution curve, you can choose a closer date for the "Probability" calculation (shown in the red box below). This is helpful because it separates the visual profit and loss lines for the various dates. This will also cause the probability calculations (shown in the purple box below) to be oriented to the new date you selected, rather than the option’s expiration date, which is the default setting. 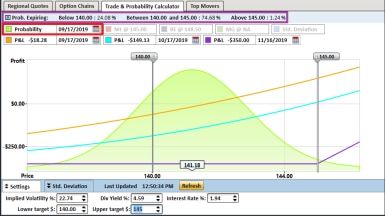 As shown below, you can turn off any of the various visual displays (the normal distribution curve in this example) by simply clicking on the colored box next to the date (shown in a red circle below). Likewise, you can turn on a visual line for the ML, BE, MG or Std. Deviations by clicking on the colored box next to these values (shown in the blue circle below). 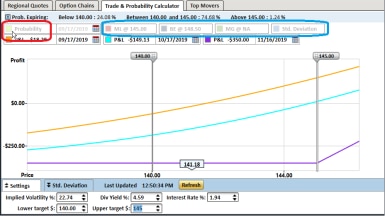 Options carry a high level of risk and are not suitable for all investors. Certain requirements must be met to trade options through Schwab. Please read the options disclosure document titled Characteristics and Risks of Standardized Options before considering any option transaction. With long options, investors may lose 100% of funds invested. Using protective puts will increase your cost basis in underlying securities. All stock and option symbols and market data shown are for illustrative purposes only and are not a recommendation, offer to sell, or a solicitation of an offer to buy any security

The Trade and Probability Calculator provides calculations that are hypothetical in nature and do not reflect the actual investment results or guarantee future results. The calculations do not consider commissions or other costs, and do not consider other positions in your account(s) for which a specific trading scenario is being examined. Rather, these values are based solely on the individual contract or pair of contracts in this specific trade. In addition, the calculations incorporate annualized dividend yields and do not consider ex-dividend dates, early assignment, and other risks associated with option trading. If an option expires before the estimated date, it is treated as though it expires on the estimated date. Investment decisions should not be made based solely upon values generated by the Trade & Probability Calculator.

Past performance is no indication (or "guarantee") of future results. The information provided here is for general informational purposes only and should not be considered an individualized recommendation or personalized investment advice.

Commissions, taxes and transaction costs are not included in this discussion, but can affect final outcome and should be considered. Please contact a tax advisor for the tax implications involved in these strategies.

The investment strategies mentioned here may not be suitable for everyone. Each investor needs to review an investment strategy for his or her own particular situation before making any investment decision. Examples are not intended to be reflective of results you can expect to achieve.

The information presented does not consider your particular investment objectives or financial situation (including taxes), and does not make personalized recommendations. Any opinions expressed herein are subject to change without notice. Supporting documentation for any claims or statistical information is available upon request.