When to Choose Munis From Outside Your Home State

A major benefit of municipal bonds, or “munis,” is that the interest they pay is generally exempt from federal income taxes. They’re also generally exempt from state income taxes if the issuer is from the investor’s home state. That may seem like a compelling argument for sticking with in-state munis. However, many muni investors may benefit by diversifying outside of their home state, even if it results in a higher state tax bill.

We’ve identified five factors when it could make sense to consider munis from other states. After considering all five, we think that muni investors in all states, with the exception of two high-tax states—California and New York—could benefit from investing in a national, not state-specific, portfolio of muni bonds. Even investors in California who are not in a high state tax bracket could achieve higher after-tax yields by diversifying nationally.

1. You live in a state with low or no state income tax.

If you live in a state with low or no state income tax, you will likely benefit from diversifying your muni portfolio with munis from issuers outside your home state. Source: Tax Foundation as of February 4, 2020. Note: The top marginal tax rate is 4.797% for Ohio and 6.925% for Idaho. Tennessee and New Hampshire only tax interest and dividend income. Local income taxes are not included.

For investors in states with no state income taxes, like Florida or Texas, there’s no state tax benefit from staying within your home state. For investors in California, on the other hand, the benefit can be large because the state tax rate is the highest in the country—13.3% for the top bracket. Therefore it may make more sense if you’re in a high-income-tax state to buy bonds issued in your home state, all else being equal.

For muni investors in Illinois, Oklahoma, Iowa and Wisconsin there is no tax benefit from staying in state, because interest income from bonds in those states is subject to state income taxes. In other words, investors don’t necessarily save on their state income tax bill by holding in-state munis.

2. You could earn a higher yield, even without state tax breaks.

Some out-of-state muni bonds offer higher yields than in-state munis, even after accounting for any state income taxes.

It depends on where you look, though. The table below shows the yields investors in certain states would have to earn on out-of-state munis compared with the yield on an index of 10-year munis issued by their home state to compensate for the lack of state income tax breaks. This assumes the investors are in their home states’ highest marginal state tax bracket. The difference in yield is expressed in basis points (a basis point is one hundredth of one percent, or 0.01%). Florida, Texas and Washington don’t have state income taxes, so there’s no spread.

Investors in various states would have to earn higher yields on out-of-state munis to make up for a lack of state income tax breaks. 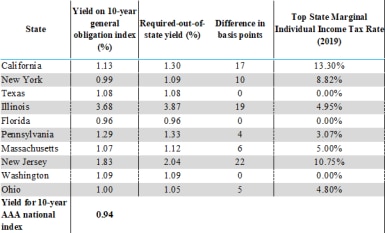 Source: Bloomberg, as of 10/30/2020 and the Tax Foundation for state tax rates, as of 02/04/2020. States selected at the top 10 based on market value in the Bloomberg Barclays U.S. Municipal Bond Index. Difference in yields may be due to different credit qualities, call features or other factors.

For example, the yield on an index of 10-year general obligation bonds issued by the state of California is currently is 1.13%. An investor in the highest marginal state tax bracket (which, in California, is 13.3%) would have to earn a yield of at least 1.30%—or 17 basis points more—on a bond from outside of California to achieve the same after-tax yield as on the in-state bond. It may be possible to achieve this higher yield if you invest in a bond from a state like Illinois or New Jersey, for example. However, those states have lower credit ratings than the state of California, and lower ratings imply higher credit risk.

Using a different example, an investor in the top marginal state tax bracket in New York would need to earn a yield of at least 1.09% to achieve the same after-tax yield as on the in-state muni. That’s possible by investing in a 10-year GO from Pennsylvania. However, the credit rating for Pennsylvania is slightly lower than the credit rating for New York, so to get a higher yield, an investor will again have to take on more credit risk.

3. You live in a state with few choices.

We recommend holding at least 10 different bonds from issuers with dissimilar credit characteristics, to create sufficient diversification in a portfolio of individual bonds. This could be difficult if your home state has a relatively small number of issuers with similar risks, but easier to achieve in a larger states such as California, New York and Texas, which have many issuers. In fact, bonds from California, New York, and Texas account for approximately 40% of all issuers in the Bloomberg Barclays U.S. Municipal Bond Index.1 But in-state diversification is difficult for smaller states—as the chart below shows, many states have fewer than 150 issuers.

The number of Moody’s-rated issuers by state

4. You may find more highly rated issuers by searching nationally.

We suggest focusing on an average credit rating of AA/Aa for an attractive balance of risk and reward in today’s environment. That means having some lower-rated (A/a or below) munis, but the bulk of the munis in your portfolio should carry higher ratings. It’s easier to find highly rated munis if you live in a state like California, New York or Texas, where there are large numbers of AAA- and AA-rated bonds, as illustrated in the chart below. It’s more difficult if you live in a state like New Jersey or Illinois, where the majority of bonds are lower than AA-rated. Consider diversifying nationally if you live in a state with fewer highly rated options.

There are a large number of highly rated bonds in California, New York and Texas 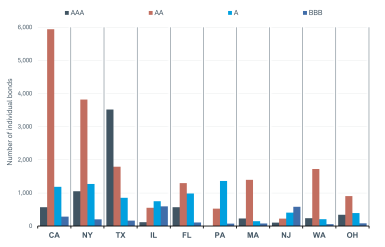 Source: Bloomberg, as of 10/30/2020. Rating is the Bloomberg Composite Credit Rating. See disclosures for definition.

5. You live in a state where issuers face similar risks.

There are approximately $3.7 trillion of muni bonds outstanding2 spread among thousands of issuers, and the credit quality of each state and issuer is affected by different factors. Even if you live in a state with many highly rated issuers, it could be beneficial to diversify nationally because those highly rated issuers are subject to similar credit risks, such as economic, political and demographic risks. Credit quality is generally stronger in areas with steadily increasing populations, skilled workforces and diverse economies.

Although historically it has been rare for municipalities to fail to make interest or principal payments on time, it does occasionally occur. If the conditions in your home state, or regions of your home state, aren’t favorable, other states’ bonds might be more appealing. Investors in Illinois, for example, should consider diversifying outside of Illinois, because of the state’s financial condition and also because most Illinois municipal bonds are subject to Illinois state income taxes.

Summing it all up

Considering all five factors, we generally suggest investors in all states other than New York and California consider munis outside of their home state. Investors in higher tax brackets in California and New York may benefit by investing in an all-in-state portfolio because of high state income tax rates and access to many different issuers with different credit risks. However, even investors in New York and California who are not in high state income tax brackets could achieve higher after-tax yields combined with greater diversification by diversifying nationally.

As always, your individual situation may vary. So choose a single-state muni or nationally diversified portfolio of munis based on your needs and situation.

Investors should consider carefully information contained in the prospectus, including investment objectives, risks, charges, and expenses. You can request a prospectus by clicking Investor Information or calling 800-435-4000. Please read the prospectus carefully before investing.

Tax-exempt bonds are not necessarily a suitable investment for all persons. Information related to a security's tax-exempt status (federal and in-state) is obtained from third parties and Schwab does not guarantee its accuracy. Tax-exempt income may be subject to the alternative minimum tax (AMT). Capital appreciation from bond funds and discounted bonds may be subject to state or local taxes. Capital gains are not exempt from federal income tax.

Diversification strategies do not ensure a profit and cannot protect against losses in declining markets.

The Bloomberg Composite (COMP) is a blend of a security's Moody's, S&P, Fitch, and DBRS ratings. The rating agencies are evenly weighted when calculating the composite. COMP is the average of existing ratings, rounded down to the lower rating in case the composite is between two ratings. The Bloomberg Composite is not intended to be a credit opinion.