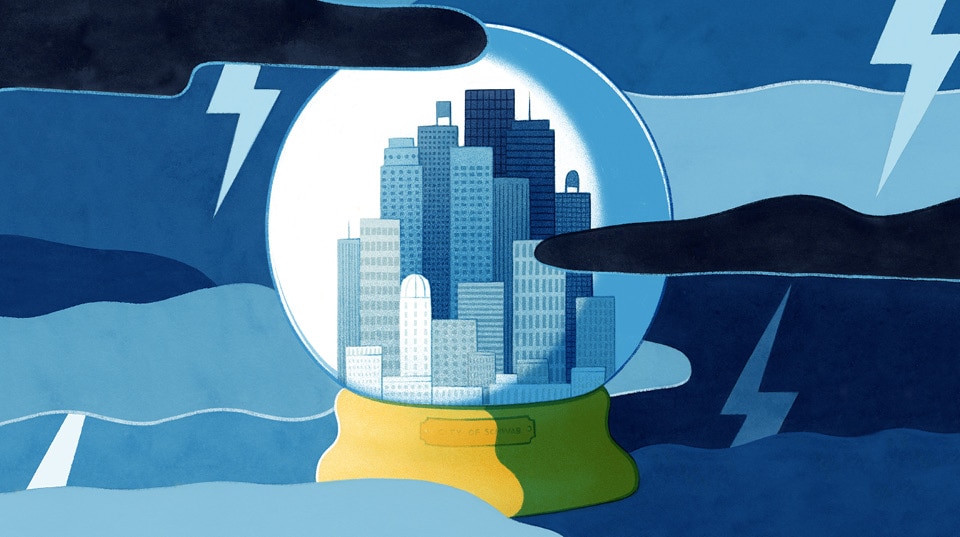 If it seems like climate-related disasters are happening more often in the U.S., it’s because they are. From 2016 through 2020, the number of such events that caused a billion dollars or more in damage averaged 16.2 annually—compared with just 7.1 annually from 1980 through 2020, according to the National Oceanic and Atmospheric Administration (see “Under the weather,” below).

As a result, municipal bond investors shouldn’t ignore the obvious: Natural disasters can have a financial impact on the municipalities in which they occur.

Let’s take a look at how these disasters may affect muni-bond issuers, along with three steps investors can take to help protect their portfolios.

The threat from climate-related disasters isn’t uniform across the entire $3.8 trillion muni market1—leaving municipalities that are prone to droughts, floods, hurricanes, and wildfires at risk of increased expenses, lower revenues, or both. And yields don’t appear to reflect such risks.

For example, consider two similarly rated airport revenue bonds—issued by Miami-Dade County and the City and County of Denver—both maturing at least 30 years from now. The risk of a severe weather event over the next three decades is much greater for Miami than it is for Denver, yet the yield to maturity for the two bonds is nearly identical. In other words, investors in Miami munis aren’t being compensated for the region’s greater weather-related risk.

The number of billion-dollar weather events hit a record high in 2020. 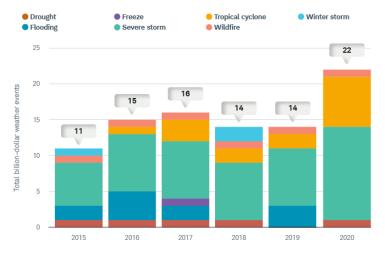 For muni investors concerned about the potential impact of weather-related disasters, we suggest:

Overall, we recommend a mix of short- and intermediate-term munis to help ensure adequate diversification. However, we caution against lower-rated, longer-term munis in areas where weather shocks are more probable.

Tax-exempt bonds are not necessarily a suitable investment for all persons. Information related to a security’s tax-exempt status (federal and in-state) is obtained from third parties and Schwab does not guarantee its accuracy. Tax-exempt income may be subject to the Alternative Minimum Tax (AMT). Capital appreciation from bond funds and discounted bonds may be subject to state or local taxes. Capital gains are not exempt from federal income tax.

Diversification strategies do not ensure a profit and cannot protect against losses in a declining market.