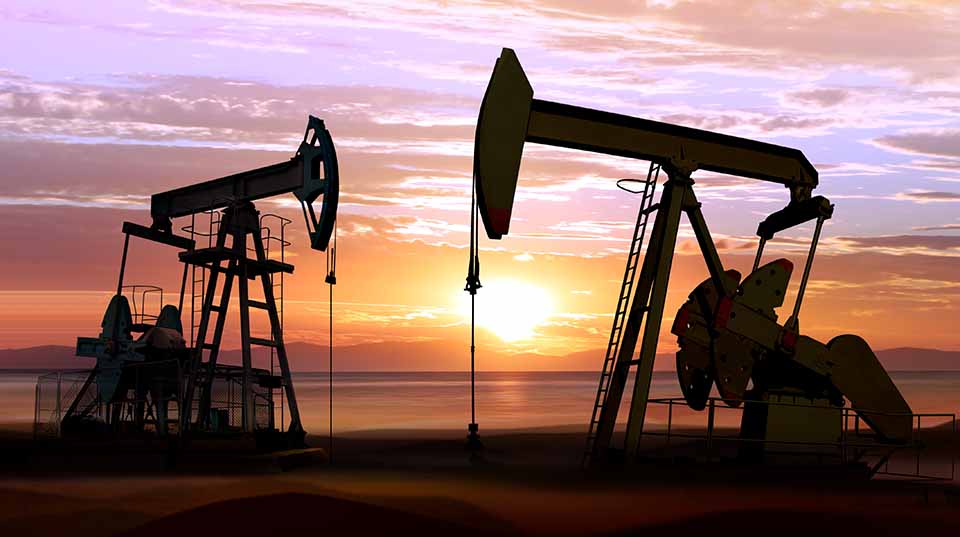 Listen to the latest audio Schwab Sector Views.
Schwab Sector Views is our three- to six-month outlook for stock sectors, which represent broad sectors of the economy. It is published on a monthly basis and is designed for investors looking for tactical ideas.

The Energy sector has outperformed the overall market year to date, as the price of oil—the primary driver of the sector—briefly surged to near 12-year highs. It's not news that the war raging in Ukraine is threatening oil supplies from Russia, the second-largest global crude oil exporter,1 leading to higher prices. But this is just part of the story. The oil market was out of balance even before the Russian invasion of Ukraine, as cautious U.S. producers and the Organization of the Petroleum Exporting Countries (OPEC) failed to keep up with rebounding demand following the COVID-19 pandemic.

Demand is typically slow to respond to the price of oil, which from a historical perspective is likely well below a level that would result in its own demand destruction (that is, when high prices cause a sustained pullback in consumption). However, with the Federal Reserve raising interest rates to battle inflation, which is the highest it's been in more than 40 years, the risk of a recession is rising—and recession historically has sapped oil demand. If the Fed can engineer a "soft landing" (an economic slowdown that avoids recession), it likely will be oil market supply that drives the next move in the price of oil and Energy sector stocks.

Given the highly volatile geopolitical circumstances that are affecting supply, we think the potential outcomes vary widely and are too unpredictable to make any outsized bets on energy stocks. Therefore, we recommend keeping allocations to the Energy sector in line with its weight in the overall market—currently about 3.8% of the S&P 500® Index. With the exception of the U.S. and U.K. sanctions, which directly banned their imports of Russian oil, much of the decline in Russian oil supplied to the world market has been the result of the indirect impact from sanctions, a show of solidarity with Ukraine, and the proximity of the war.

Tanker loadings of Russian oil have slowed as insurers backed away from coverage and shippers sought to avoid the military conflict on the shores of the Black Sea. Many banks have stopped financing trades in Russian oil, and numerous companies—like ExxonMobil, BP, Shell, Haliburton, and Schlumberger—are no longer buying oil and/or are ceasing oil operations in Russia.

The International Energy Agency (IEA) has estimated that up to 3 million of the 8 million barrels per day (bpd) of oil produced by Russia could be disrupted in the short term.2 This is about 3% of global daily supply. To put the potential impact into perspective, total world commercial inventories would decline to the lowest level in 20 years within 90 days if this supply is not replaced and demand remains constant. As illustrated in the chart below, inventories are already at a record low relative to the five-year moving average. The EIA had anticipated inventories would rise this year, pressuring oil prices lower, as of the March 2022 Energy Information Administration (EIA) Short-term Energy Outlook (the latest available at the time of this writing. That forecast is now clearly at risk given the highly uncertain events unfolding in Ukraine.

The EIA had forecast rising oil inventories, but this forecast is at risk

Source: Charles Schwab, Energy Information Administration (EIA), Bloomberg as of 3/31/2022. The dashed lines in the chart on the right reflect the IEA's forecasts. Past performance is no guarantee of future results.

The good news is that there is enough capacity to replace a decline in Russian oil exports. However, that supply is impacted by geopolitics, as well as slower-moving microeconomic factors. OPEC has just under 4  million bpd of excess capacity.3 Existing sanctions against Iran are responsible for 1-2 million bpd of locked-up capacity,4 while other OPEC members (primarily Saudi Arabia, which controls the bulk of remaining OPEC excess capacity) have been stubbornly slow to boost their exports to make up for the shortfall. There has been some headway in resolving sanctions on Iran (an OPEC member), but there are no assurances that OPEC will increase exports by more than already planned.

The U.S. is the world's largest oil producer and is currently pumping about 1.2 million bpd less than prior to the crisis.5 However, bringing this supply back online is up to energy companies based on their fundamentals—not as dictated by the U.S. government or a cartel like OPEC. Despite oil trading well above average profitable levels, U.S. oil producers have been reluctant to commit to the capital spending necessary to boost production. Besides being burned several times by crashing oil prices in the last decade, the transition to clean energy—and the regulatory risks, investor activism, and higher financing costs that come with it—has encouraged energy companies to return capital to investors in the form of dividends rather than investing in productive capacity.

As can be seen in the chart below, capital expenditures are less than 40% of what it was when oil was at the same price in 2014. Many producers are reportedly investing just enough to keep output at current levels. Much more investment is needed to boost production to pre-COVID levels, and it's estimated that it would take at least a year to do so.

Stockpiles can reduce risk of severe price spike, for now

Existing commercial inventories of oil alone cannot mitigate the supply problem. Commercial inventories are low, and a further decline could cause prices to rise substantially. But as the chart below reflects, if Russia's total oil exports of 4.7 million bpd were to be embargoed, there would still be 570 days available in commercial inventories. In the meantime, increased U.S. production and OPEC excess capacity could fill the gap. We're not going to run out of oil.

Furthermore, there is a big stockpile of Strategic Petroleum Reserves (SPR), which are inventories of oil stored and owned by governments. The primary purpose of the reserves is to provide supply in case of a natural disaster or geopolitical event that disrupts the supply of oil, as is currently happening. The Biden Administration recently announced a release of 1 million bpd for 180 days. This more than offsets the 0.7 million bpd previously imported from Russia,6 though falls well short of the estimated 3 million bpd to come off the market. However, if the crisis persists, there is enough in global SPR to replace all Russian exports for 340 days. In combination with commercial inventories, there is likely enough oil in SPR to reduce the risk of a severe oil price spike for the time being.

There is supply available to cushion a drop in Russian exports

The economy is less dependent on oil than in the past

The good news is that the global economy is much less dependent on oil than in the past, and it's cheaper in real terms (adjusted for inflation), which means it's possible prices could rise substantially before it has a big negative economic impact. Since 1990, energy intensity (that is, units of energy per dollar of gross domestic product, or GDP) has declined by more than 40%. 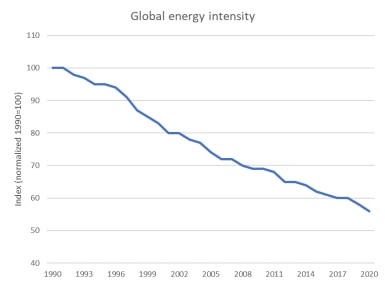 Source: Charles Schwab, U.S Energy Information Administration of 3/31/2022. Energy intensity is defined as a unit of energy per dollar of GDP.

The inflation-adjusted price of oil is well below previous peaks 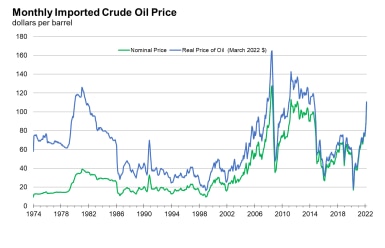 Nevertheless, Fed Chairman Jay Powell has committed to breaking the back of inflation, which is much broader than just energy prices, even if it means plowing the economy into a deep recession—much like former Fed Chairman Paul Volker did in the early 1980s, with back-to-back recessions. Those recessions knocked oil demand lower by nearly 10%, according to the BP Statistical Review of World Energy. The 2008-2009 financial crisis shaved demand by 3%, which would be just enough to address today's shortfall. It goes without saying that we'd rather see oil prices fall due to an increase in supply than because of a Fed-forced recession that decreases demand.

We suggest market-weighting the Energy sector

It's clear that the energy picture is anything but clear. There are numerous scenarios that could result in much higher or lower oil prices. Until there is more clarity on how the Russian oil supply will be impacted, the extent that SPRs will be used, in what way energy producers will respond to high prices, and how the Federal Reserve's interest rate hikes might impact the economy and underlying fundamentals that drive relative sector performance, we think it's prudent to maintain sector allocations that are in line with its weighting in the overall market.

Want to learn more about a specific sector? Click on a link below for more information or visit Schwab Sector Views to see how they compare. Schwab clients can log in to see our top-rated stocks in each sector.

How should I use Schwab Sector Views?

Investors should generally be well-diversified across all stock market sectors. You can use the Standard & Poor’s 500® Index allocations to each sector, listed in the chart above, as a guideline.

Investors who want to make tactical shifts in their portfolios can use Schwab Sector Views' outperform, underperform and neutral ratings as a resource. These ratings can be helpful in evaluating and monitoring the domestic equity portion of your portfolio.

Schwab Sector Views can also be useful in identifying stocks by sector for potential purchase or sale. Clients can use the Portfolio Checkup tool to help ascertain and manage sector allocations. When it's time to make adjustments, Schwab clients can use the Stock Screener or Mutual Fund Screener to help identify buy or sell candidates in particular sectors. Schwab Equity Ratings also can provide a fact-based and powerful approach for helping you select and monitor stocks.

Diversification and asset allocation do not ensure a profit and do not protect against losses in declining markets.

Commodity‐related products, including futures, carry a high level of risk and are not suitable for all investors. Commodity‐related products may be extremely volatile, illiquid and can be significantly affected by underlying commodity prices, world events, import controls, worldwide competition, government regulations, and economic conditions, regardless of the length of time shares are held.

The policy analysis provided by the Charles Schwab & Co., Inc., does not constitute and should not be
interpreted as an endorsement of any political party.