Traders Tell All: A Look at 3 Traders’ Daily Routines

While many investors prefer the relative ease of buying and holding securities for the long term, others have developed an appetite for more active trading—a pursuit that can be as rewarding as it is risky. “The good news is that it’s possible to mitigate the downside,” says Kevin Horner, a senior manager with Schwab’s trading-education team, “but doing so consistently requires discipline and a plan.”

Interviews with several Schwab clients who trade frequently bear that out. All three manage their long-term holdings separately from any actively traded positions. And all have their own resources, routines and tools for identifying opportunities and managing risk.

Even if you don’t have a passion for trading individual securities, you might be able to learn something from those who do. Here’s how these three active traders spend their days.

“You don’t have to limit yourself to online tools.” Routine: This former tech CEO goes by the name Tribune Marcus in online trading communities. Tribune rises early and sits down before a mix of monitors—one showing Bloomberg Television or CNBC, another with Schwab StreetSmart Edge® (see “The right stuff,” below) and a third with a trading screen at the ready.

Tribune estimates he manages from three dozen to six dozen holdings on any given day. He jokes that he works longer hours now than he did as a CEO, arriving at his desk before markets open and staying put until they close—after which he often reads up on long-term trends for a more-macro perspective on his portfolio. When he does step away from his desk, he keeps up with the market using the Schwab mobile app, along with CNBC, Yahoo Finance and Twitter (where a “$” preceding any stock symbol indicates real-time news and commentary).

Tools: Tribune starts by looking at global macroeconomic trends. “I then use Schwab’s fundamental-analysis tools within StreetSmart Edge to search for best-in-class companies within particularly promising countries and sectors, and then technical trading tools to determine buy and sell targets,” he says.

Once, when a retail stock caught his eye, he even made a point of stopping by one of the company’s stores during his travels, identifying himself as a potential shareholder and asking to speak with the manager. “That’s the kind of work you can do in areas you’re not so familiar with,” he says. “You don’t have to limit yourself to online tools.”

Inspiration: Tribune regularly attends biotech and technology conferences in search of ideas and to commune with like-minded investors. He also follows the conversations in online trading communities, “which I often use either to challenge existing assumptions or gain new insights,” he says.

“Even really experienced traders don’t always have all the answers.”

Routine: Jim works a full-time job in San Francisco but rises early to look at sites like Seeking Alpha. He’ll check on his various positions during his lunch hour and often does more research in the evening, including watching CNBC’s “Nightly Business Report” on YouTube.

Tools: Keeping a detailed record of one’s own trading experiences can be instructive. Jim maintains a spreadsheet that tracks the performance of his various trades. Reviewing it at the end of each year helps him improve his overall approach, he says.

Schwab’s Kevin Horner agrees that keeping even simple notes on open positions can be helpful. While StreetSmart Edge allows you to pin notes to stock charts and keep comprehensive records on why some trades worked out and others didn’t, “you can also use something as low-tech as a sticky note on a monitor to remind you of the exit price you established when opening the trade,” he says. “Believe it or not, documenting your strategy can be one of the greatest tools. It forces you to recognize when you’re departing from that approach—and ask yourself why.”

Inspiration: Jim follows earnings releases and other events that can move a stock. He’ll set up calendar alerts in advance of company reporting dates, aiming to buy a week or so ahead of the announcement if he’s expecting results to exceed consensus estimates. He also keeps in touch with a handful of like-minded friends through a group chat on WhatsApp. “Our experience ranges from the novice to the really experienced—and the latter don’t always have all the answers,” he says. 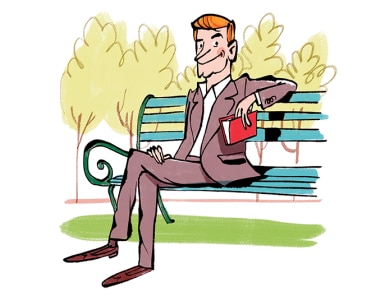 Routine: Having spent decades as a fund manager closely monitoring the markets, Carson now spends most mornings with The Wall Street Journal and Barron’s to keep abreast of financial news and for insights that might lead to trading opportunities.

Tools: Carson uses technical analysis to determine the right entry price for a given stock. He says the advance-decline line, or the number of advancing stocks minus the number of declining stocks, can signal trends in the broader market. He’s also been teaching his son about investing—and learning something along the way himself—by attending seminars at his local Schwab branch.

Inspiration: Despite his years of professional experience, Carson still relies on wisdom from a book that influenced him early on: Peter Lynch’s One Up on Wall Street, which advises investors to pay particular attention to the products and services they rely on day to day.

“Another thing I try to take advantage of—which may be obvious but is nevertheless often underestimated—is that companies that are doing well tend to continue to do well, and companies that are doing poorly tend to continue to do poorly,” Carson says. He points to the Schwab Equity Ratings® assigned to approximately 3,000 of the largest U.S. stocks, using a scale of A through F. “There is quite a bit of history that shows that the higher-ranked stocks do better over time,” he says.

Designed as a sophisticated trading tool that is nevertheless simple and intuitive to use, StreetSmart Edge displays streaming market data and news, enables fundamental and technical analysis, and facilitates complex actions like entering conditional trade orders for multiple security types.

“StreetSmart Edge and most other trading platforms allow you to automate exit strategies,” says Schwab’s Kevin Horner. “That not only gives you the freedom to step away, but it also helps remove emotion from the process.”

The testimonials may not be representative of the experience of other clients and are not a guarantee of future performance or success.

All expressions of opinion are subject to change without notice in reaction to shifting market conditions.

Schwab Equity Ratings and the general buy/hold/sell guidance are not personal recommendations for any particular investor or client and do not take into account the financial, investment or other objectives or needs of, and may not be suitable for, any particular investor or client. Investors and clients should consider Schwab Equity Ratings as only a single factor in making their investment decision while taking into account the current market environment.