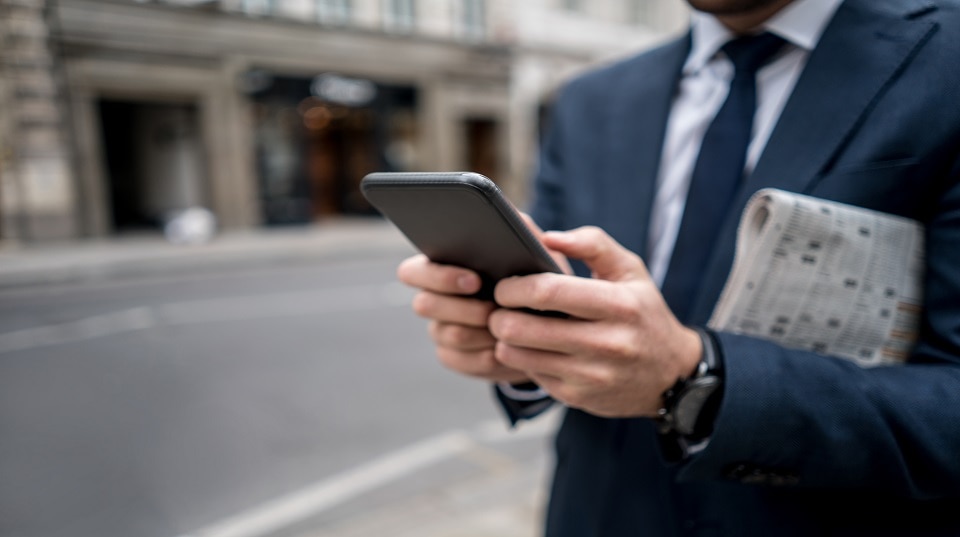 Given all the municipal bonds to choose from, how do you decide which ones should make up the core of your portfolio? With $3.9 trillion of muni debt outstanding1 spread among tens of thousands of issuers, the choice may seem daunting, but we’ll help you break it down.

Municipal bonds are sold by local and state governments to help fund public projects or municipal government operations, like building new schools or repairing city sewer systems. Their interest payments are usually exempt from federal income taxes, and may be exempt from state income taxes if the bond issuer is located in the investor’s home state. For these reasons munis are often attractive to income-oriented investors in higher tax brackets looking to reduce income tax bills.

The market’s perception of GOs has changed

Although general obligation bonds account for only about a quarter of the muni bond market, they tend to get the most attention. Historically, GO bonds were considered the more secure of the two options, because they are often backed by the full faith and credit of the municipal government. Given GO bonds’ perceived security advantage, revenue bonds used to yield more than GO bonds on average—but that has changed in recent years, as illustrated in the chart below. The change can be partly attributed to Detroit’s bankruptcy in 2013. Initially, Detroit tried to treat its GO bondholders as “unsecured” creditors,2 which would have gone against the market’s longstanding belief of the security pledge of GOs. Detroit’s bankruptcy was settled outside the court, so there was no legal opinion on its security pledge. The result was that muni market participants began to scrutinize GO bonds more closely.

Revenue bonds used to yield much more than GO bonds 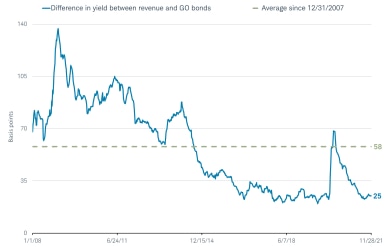 There are different types of general obligation bonds

A common mistake some municipal bond investors make is assuming that any general obligation bond issued by a state or local government is backed by the same pledge. Since the yield on the average GO bond has moved closer to the yield on the average revenue bond, it’s especially important today to understand the different credit pledges on GO bonds. The most common types of GO bonds issued are:

These three types are listed in order from generally the strongest to the weakest, in terms of their financial pledges.

These bonds are often backed by a dedicated tax—usually property tax—that the municipality collects. Frequently, these bonds are also backed by a pledge that the issuer will use all other available revenue sources, such as other taxes or state support, if the taxes specifically authorized to repay the bonds aren't sufficient.

These bonds are backed by the general revenues of an issuer, including taxes. Unlike dedicated tax GOs, however, they do not have a specific tax pledged to repay them. Instead, bondholders are paid from general revenues, and if those prove insufficient to cover debt service, the issuer typically must raise taxes. In our view, this is a very strong pledge.

Like unlimited tax GOs, these bonds are backed by the general revenues of an issuer, including taxes. However, the issuer doesn't have the ability to increase taxes by an unlimited amount to pay the bonds back. The limit on the amount of tax increase allowed is generally described in the bond offering statement, and the bonds are clearly labeled. Although we believe this is still a strong pledge, the limit on the tax lessens the security of the bonds.

Investors can find the bond’s pledge by reviewing the official statement on Schwab.com or the EMMA (Electronic Municipal Market Access) website. A fixed income specialist can also assist, as official statements can be long and cumbersome.

With high-profile cases like Detroit’s bankruptcy and Puerto Rico’s effective bankruptcy in 2017, it may seem like GOs frequently default—but that’s not the case. It may also seem like the COVID-19 crisis devastated the finances of many state and local governments and caused an increase in defaults, but that’s also not the case. As illustrated in the chart below, defaults are rare in the muni market and even rarer for general governments, which include GO bonds. In fact, only one issuer that Moody’s rates defaulted in 2020. Although the financial issues caused by COVID-19 will likely linger and will be an added credit pressure for state and local governments, we expect defaults to continue to be rare.

General governments, which include GO bonds, have rarely defaulted historically

What investors can consider now

Given the financial pressures that COVID-19 is creating for some municipal governments, we think it’s especially important today to know what is backing your municipal bond and how to combine different muni bond types to build a well-diversified portfolio.

General obligation bonds, in combination with other essential service revenue bonds, can serve as the core of a muni portfolio. First, focus on higher rated issuers—those rated AA-/Aa3 or above. More speculative investors looking for higher interest income could consider no more than 30% in lower rated issuers—those rated between BBB-/Baa3 and A+/A1. As one would expect, a lower-rated bond has a much greater chance of default than one with higher ratings.

If you’re a Schwab client investing in municipal bonds through mutual funds or exchange-traded funds (ETFs), you can find the ratings distribution and breakdown of GO and revenue bonds on the “Portfolio” tab on Schwab.com. For help in selecting municipal bond investments that are right for your personal situation, consider reaching out to a Schwab Fixed Income Specialist.