War in Ukraine: Recession in Europe? 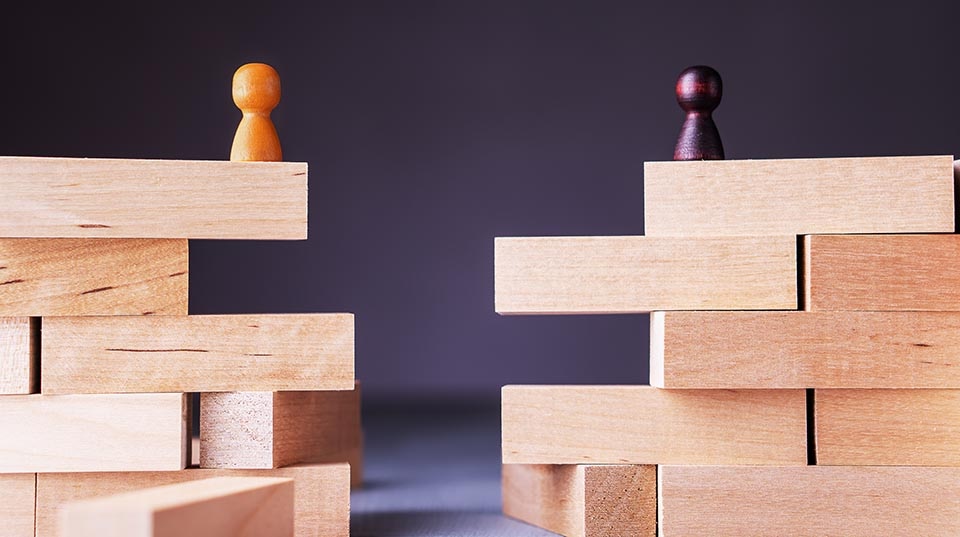 The past isn’t a perfect predictor of market behavior, but it has proven to be a useful guide. A long history of geopolitical conflicts, including those involving Russia, have seen stocks recover and post gains after periods of armed conflict during the past 30 years (1991, 2001, 2003, 2014)—except when an economic recession followed (2008). 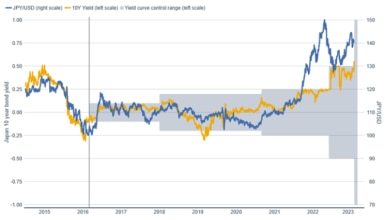 Source: Charles Schwab, Macrobond, STOXX 600 Index as of 3/13/2022. Past performance is no guarantee of future results.

Although these conflicts differed, there were similarities in their economic backdrop and all of them involved major energy exporters. For example, ahead of the conflicts in 1991 and 2001 there were recessions, as we recently experienced in 2020. Oil prices doubled in the run up to the conflict in 2003. Economic sanctions on Russia were applied in response to the wars in 2008 and 2014. The Fed gave us the “taper tantrum” when it signaled tightening ahead of the conflict in 2014.

A key question for investors is: Will the current conflict lead into a recession? In our view, the odds are above average, but still below 50%.

Outside of Russia, the biggest risk of recession is in Europe. Europe’s economy is currently being challenged by higher energy prices and tighter lending conditions in the wake of the Ukraine invasion, due to higher reliance on Russian energy, economic ties, and geographic proximity. Because Europe is a huge customer of products and services produced by companies headquartered in the U.S. and Asia, investors everywhere are focused on this risk of European recession.

Should a blanket ban on energy imports from Russia in all major consuming countries, not merely the U.S., come to pass, it would severely reduce and disrupt energy supply on a global scale, making recession more likely. However, that scenario doesn’t seem likely in the near term; the German chancellor has currently outright rejected the idea of a ban on Russian energy imports to Europe due to the economic harm it would inflict on its economy. Additionally, there seems to be no indication that Russia intends to cut off energy exports—which make up over a third of their gross domestic product (GDP).

Encouragingly, economic data in Europe shows that the economy strengthened in February before the war, rebounding from the omicron-driven slowdown. Moreover, last Thursday, the European Central Bank (ECB) revised its forecast for Europe’s GDP growth this year down from a very fast 4.2% to a still strong 3.7% due to the war. Their forecast came with two downside scenarios: the “adverse scenario,” in which they estimate 2.5% GDP growth; and the “severe scenario” estimate, pushing GDP growth down to 2.3%. These scenarios are both still well above the negative rate of change that would define a recession. In the worst-case scenario, the ECB still sees above-average growth for Europe this year, which is notable for a central bank whose policy has anticipated economic weakness for the past decade.

ECB: Recession not on the table

Of course, the ECB could be wrong. To track what is happening in Europe’s economy in real time, we have gone back to looking at some of the high-frequency indicators of consumer activity which worked well for us during the pandemic to assess the economic trend. This data has been showing us that consumer activity seems to be holding up, so far. For example: 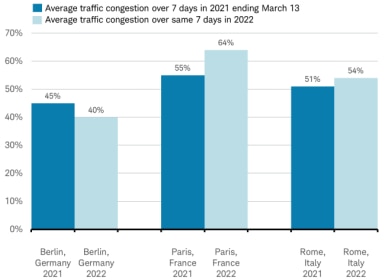 Source: Charles Schwab, BoxOfficeMoJo.com data as of 3/13/2022. Data is dominated in U.S. Dollars.

So far, it seems like Europe’s economy, which is very much driven by consumer spending, seems to be tracking European Central Bank’s estimates of a relatively steady pace of economic activity.

Outside of the potential for a sharp slowdown in activity to lead to an economic recession, there are indirect risks to economic growth from a financial shock.

Russian stocks and bonds have plunged. The Russian stock market declined more than 50% before being halted for trading after the invasion of Ukraine. Russian government bonds are now priced at around 10 cents on the dollar from above 110 at the start of the year. It’s rare to see any economic fallout on the stock side (usually financial institutions don’t tend to have a lot of stock market exposure), making Russia’s market decline less impactful outside of Russia. Generally, it is bond market defaults that have more potential to cause trouble for the world’s financial system and economy.

Pre-invasion, Russian bonds made up less than 0.3% of the global aggregate bond index, comparable to the exposure of Venezuelan bonds before 2017. Venezuela (another big oil exporter) and its state-owned oil company had started to default on its debt in response to U.S. sanctions in 2017, and completely defaulted on all debt by 2019. Why was there no global financial crisis in response to that default? Because it was isolated to one country and not part of any contagion tied to unsustainable debt and current account balances across emerging-market countries. We believe Russia’s potential bond defaults are also unlikely to cause a financial crisis this time, for similar reasons. Importantly, European banks appear to have low exposure to Russian government bonds.

Russia’s potential default risk is not isolated to its bond issuance. One additional channel of default risk is through the derivative markets. As an example, if a Russian oil company wanted to hedge against a drop in oil prices, it might have taken out a derivative contract with an exchange a year ago. That contract would now be at a deep loss due to the rally in oil prices. The Russian company may not be able to cover the loss for various reasons and could default. The Russian company’s broker in this scenario—perhaps a subsidiary of a major bank—would be required to cover the loss to the exchange (as it would if the contract didn’t go through an exchange but was instead directly with the bank). If these losses are large, or if there are many of them, the bank could find itself in need of capital. This potential scenario playing out across multiple banks could cause a chain reaction to reduce risk, leading to higher margin requirements and margin calls, draining liquidity from the commodity markets, and forcing corporate treasurers to sell other financial assets to meet calls.

Investor caution regarding this possible scenario may be part of the reason financials have been the worst-performing sector over the past couple of weeks. Yet, in our analysis, the size of any potential losses from derivative default is unlikely to be substantial relative to the capital the banks now hold. This leads us to conclude that a major financial shock from the plunge in Russian stocks or bonds or a default in the derivatives market seems unlikely.

A long history of sanctions shows they don’t seem to change behavior or oust leaders, (e.g., the many years of tough sanctions on Iran, North Korea, and Venezuela). But, they do impose severe costs leading to longer-term policy shifts, which do tend to restrain regimes, and have a lasting global impact.

Europe is considering a joint bond to finance higher energy and defense spending as it seeks to reduce its dependence on Russian energy imports by two-thirds within the next nine months (by next winter’s heating season). While the severe costs of the tight commodity markets pose a near-term risk to growth, the massive government spending needed to undertake this dramatic transition in Europe is likely to act as a tailwind to growth over a much longer term than the next few months.

We believe the odds of a recession in Europe are above average and rising, but still below 50%. We will be watching the developments and high-frequency data closely to see how the economic outlook evolves. Signs of stability could support Europe’s stocks, but a weakening picture could mean more volatility for stocks in Europe and elsewhere.

In the current environment, it is hard to have a lot of confidence in how and when the war and related impact is going to resolve, for better or worse, in the near-term or longer-term. So rather than make a bet one way or another, until we know more, it makes the most sense to rebalance back to your long-term strategic asset-allocation targets and let broad diversification help manage the heightened volatility.

All expressions of opinion are subject to change without notice in reaction to shifting market conditions. Data contained herein from third-party providers is obtained from what are considered reliable sources. However, its accuracy, completeness or reliability cannot be guaranteed.  Supporting documentation for any claims or statistical information is available upon request.

Diversification and rebalancing portfolio strategies cannot ensure a profit or protect against a loss in any given market environment.  Rebalancing may cause investors to incur transaction costs and, when rebalancing a non-retirement account, taxable events may be created that may affect your tax liability.