What Do Rising Rates Mean for Stock Investors? Last week, U.S. Treasury bond yields, climbed back to their pre-pandemic levels. In Europe, German 10-year yields climbed to near 0%, touching their highest level since May 2019. What are the implications of rising global yields for stock prices? Increasing yields could help lift stocks and may even signal outperformance of cyclical European stocks and value stocks.

The end of an era?

Interest rates and stocks have moved together for the past 20 years, but this hasn’t always been the case. In the prior multi-decade period, from the 1970s into the 1990s, when interest rates went up, stocks generally fell. 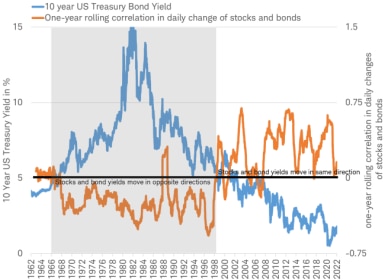 The relationship between bond yields and stocks prices has changed over time. So, how can we tell if the current era may be ending? Well, the ten-year U.S. Treasury yield remains well below 5% and historically, that has been the threshold for a change in the relationship.

The only exception to this was the period around the 1987 stock market crash, when stocks and yields moved together. However, these circumstances were unique; the market decline was not precipitated by an economic recession-driven drop in bond yields.

The different eras may be the result of the changing relationship between yields and the economic outlook. Stock returns typically move in sync with the outlook for economic growth because economic growth is reflected in corporate earnings, which are one of the most important drivers of stock market performance. However, bond yields have become increasingly cyclical over time. In the current era, the U.S. Treasury bond yield and the world’s leading economic indicators have moved in sync. Prior to the 1990s they moved in opposite directions. This phenomenon is seen with global growth and U.S. bond yields, as well as within Europe. 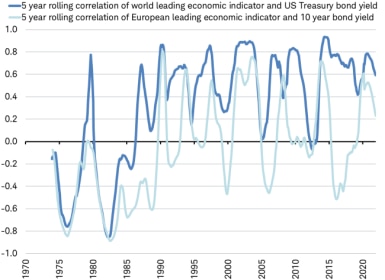 Today, U.S. 10-year yields are still well below 5%. Even more importantly, we expect the relationship between bond yields and economic activity to remain positive, maintaining the current era in which bond yields and stock prices generally move in the same direction. We believe global bond yields have more upside, even if inflation slows in 2022, as we expect. Although in Europe and the U.S., long-term inflation expectations have been flat for the past three months, the outlook for the real yield (10-year Treasury yield minus 10-year inflation expectations) is driving higher as confidence grows in the economic growth outlook and monetary policy begins normalization.

Now, runaway global inflation could still pose a risk. If inflation does not stabilize in 2022, the subsequent increase in yields could turn negative for stocks and for the economic outlook. The current scenario does have the potential to herald the return to a negative correlation between stock prices and bond yields.

An investment implication of rising bond yields is that investors should consider an overweight to their stock allocation. Note that rising rates have historically accompanied the outperformance of European stocks compared to the U.S. and within European stocks, outperformance of value stocks over growth stocks. This is largely attributed to the greater cyclicality of both European equities and value stocks. The ten-year European bond yield, which has been in decline since 2007 may be starting a meaningful rise, a possible indication that European value stocks could begin to outperform growth stocks, as you can see in the chart below.

Source: Charles Schwab, Bloomberg data as of 1/17/2022. Past performance is no guarantee of future results.

U.S. and global benchmark yields are gaining traction, moving higher along with positive global economic sentiment. Because they are still low by historical standards, we believe they will still be positively correlated to market returns. In this rate environment, economically sensitive stocks, such as European stocks and value stocks, may be poised to outperform based on historical patterns.  While rising inflation could risk breaking down this correlation, investors may want to consider increasing their overall stock allocation, with a focus on more cyclical areas of the market.

This content was created as of the specific date indicated and reflects the author’s views as of that date. It will be kept solely for historical purposes, and the author’s opinions may change, without notice, in reaction to shifting economic, business, and other conditions.

Data contained herein from third-party providers is obtained from what are considered reliable sources. However, its accuracy, completeness or reliability cannot be guaranteed. Supporting documentation for any claims or statistical information is available upon request.

Correlation is a statistic that measures the degree to which two datasets move in relation to each other, and range in value between -1.0 (perfectly opposite movements) to +1.0 (perfectly in sync movements).  A value of 0 is defined as being uncorrelated (no association).  It is not a measure of causality.

Performance may be affected by risks associated with non-diversification, including investments in specific countries or sectors. Additional risks may also include, but are not limited to, investments in foreign securities, especially emerging markets, real estate investment trusts (REITs), fixed income, small capitalization securities and commodities. Each individual investor should consider these risks carefully before investing in a particular security or strategy