What Happens to Munis When the Fed Hikes Rates? 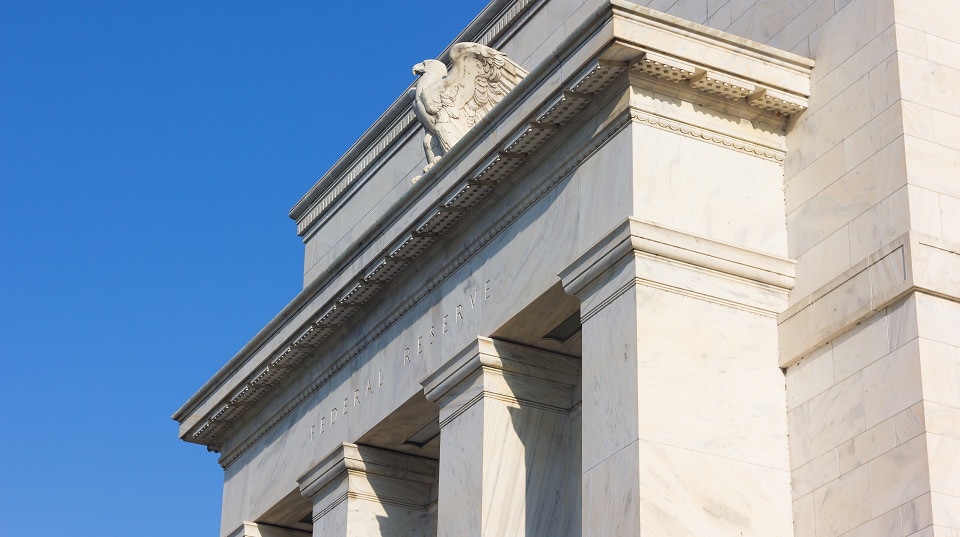 The Federal Reserve has indicated it plans to start raising short-term interest rates soon. Because bond yields and bond prices generally move opposite one another, investors may assume that rate hikes lead to negative returns for municipal bonds. However, that hasn’t been the case during the three most recent cycles.

While each cycle is unique and this time may be different, we don’t think the prospect of Fed rate hikes is a reason to wait to invest in munis.

The Fed is poised to begin raising rates again

No two rate-hike periods have been identical. The table below illustrates how the economic situation varied at the start of each period. However, we can still draw some conclusions. For example, the most recent rate-rising cycle began in December 2015, a period during which the Fed raised the federal funds rate target nine times. The federal funds rate (the rate at which commercial banks borrow and lend their excess reserves to each other overnight) rose from the zero-to-0.25% range to the 2.25%-to-2.50% range over the course of three years. The Fed raised rates despite stubbornly low inflation and relatively weak economic growth in an attempt to bring the rate back to a more normal level following the 2008 credit crisis.

The Fed likely will move more aggressively than in the last cycle because inflation is much higher and unemployment is lower than in 2015. In addition, we expect the Fed to start shrinking its balance sheet this year, serving as an additional form of tightening.

Each rate-hike period has been unique

*Designates this was the most recent reading prior to the first rate hike.

Source: Bloomberg, as of 1/27/2022. The Consumer Price Index (CPI) is a measure of the average change over time in the prices paid by urban consumers for a market basket of consumer goods and services. Year-over-year (YOY) gross domestic product (GDP) growth measures change in the total monetary or market value of all the finished goods and services produced within a country’s borders in a specific time period.

Basic bond math says that yields and prices move opposite one another, so many assume that when the Fed hikes rates it results in negative returns for muni bonds. However, that hasn’t been the case during the three most recent cycles, which began in 1999, 2004, and 2015, respectively. In fact, total returns for municipal bonds were positive in all three periods. (We are focusing our analysis on the three most recent periods due to index limitations.)

Total returns over rate-hike periods have been positive 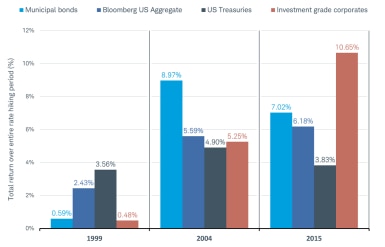 Part of the reason why munis have performed relatively well is likely because of the longer duration of the municipal bond index relative to the other indices, and how longer-term rates change before and after the Fed starts hiking rates. Duration measures how much a bond’s price varies with changes in interest rates; the higher the duration the more price tends to change.

Rates tend to rise before the Fed starts hiking rates

Source Bloomberg, as of 1/26/2022. Past performance is no guarantee of future results.

Digging under the muni-market hood helps illustrate why managing duration matters when the Fed is hiking rates. In the two most recent cycles where longer-term yields fell, there was a clear pattern of longer-term bonds outperforming their shorter-term counterparts. The 1999 cycle is an outlier because longer-term rates drifted higher shortly after the Fed started hiking rates. This initially resulted in negative total returns for munis. However, in time—and partially due to reinvesting—returns eventually turned positive and delivered slightly less than 0.6% over the whole period for the broad index. 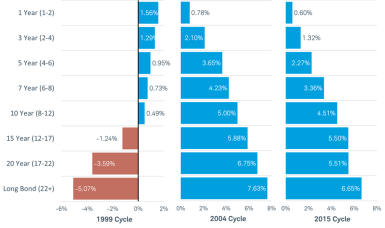 Source: Components of the Bloomberg Municipal Bond Index, as of 1/26/22 Past performance is no guarantee of future results.

Duration only tells part of the story

Another reason lower-rated issuers outperformed in the 2004 and 2015 cycles is because their higher coupons were reinvested.

Lower-rated munis have historically performed well during rate hiking cycles, with 1999 being the exception 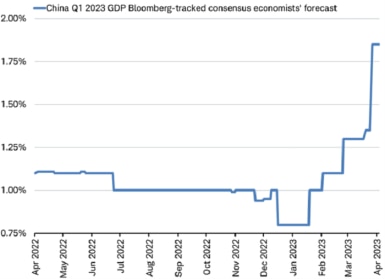 Source: Components of the Bloomberg Municipal Bond Index, as of 1/26/2022 Past performance is no guarantee of future results.

Summing it all up

Despite each cycle being unique, munis tend to post positive returns when the Fed is hiking interest rates. We can also generalize that lower-rated and longer-term munis tend to outperform once the Fed starts hiking rates but that’s really because of the change in the shape of the yield curve and the health of the economy. Based on how munis typically have performed in the past, and the current environment, we suggest targeting some lower-rated issuers and favor a benchmark or slightly shorter-than-benchmark duration. We suggest that the bulk of a muni portfolio be in highly rated (AAA/Aaa and AA/Aa) issuers. However, given the current state of the economy, investors should consider adding some lower-rated issuers. Economic growth is expected to be strong in 2022, with a consensus economic estimate at 3.8%, albeit down from 2021. In addition, we think credit conditions for most municipal issuers are favorable. Tax revenues have soared, led by a surge in income and business taxes.

Putting it into action

The prospect of Fed rate hikes shouldn’t dissuade investors from taking action in the muni market. This cycle may be different from those in the past, but we still expect munis to perform relatively well despite Fed tightening.