When Markets Dip, Don’t Drop Out

An extreme downturn in the market can shake your confidence, but keeping your mind set on your long-term goals can help you weather the storm. Consider how these three investors—the Stalwart, the Reactor, and the Waffler—behaved during different market conditions over the course of 40 years.

This chart illustrates the growth in value the Stalwart, the Reactor, and the Waffler achieved after saving 10% of their annual salary invested in increasingly conservative asset allocations as they aged over four decades. 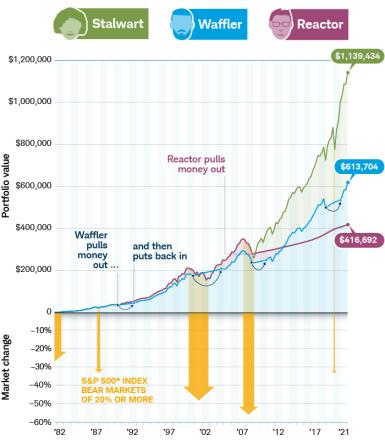 The examples are hypothetical and provided for illustrative purposes only. The asset allocation plan performance is the weighted averages of the performances of the indexes used to represent each asset class in the plans, and the plans are rebalanced annually. Fees and expenses would lower returns. Using the same methodology, had a saver stayed invested over four decades in a fund that tracks the S&P 500® index instead of the Schwab models, he or she would have experienced greater volatility and would have had an ending wealth of $2.05 million.

In this scenario, the Stalwart, the Reactor, and the Waffler each began at age 26 with a salary of $18,580 in 1982 that grew to $112,560 in 2021 based on a 3% annual increase and a 10% promotion every five years. All three savers started investing with the Schwab Aggressive Model Plan (50% large-cap stocks, 25% international stocks, 20% small-cap stocks, 5% cash). Over the course of four decades, the person who reacted the least gained the most.

The Waffler followed the same allocation plan as the Stalwart, but he would move all his money out of the market after every year with negative returns. Meanwhile, he continued to save 10% of his salary.* If the market was up after two years, he reinvested his money in a portfolio suitable for his age. With an ending balance of $613,704, the Waffler’s strategy cut his potential growth by almost 41%.

This investor stuck it out through several bear markets, but he pulled his money out of the market during the Great Recession in 2008—and kept it out. He continued to save 10% of his salary with hopes of recouping some of his losses but never reinvested it.* At the end of 40 years, he only managed to save $416,692.

Each investor had an identical starting allocation and saved the same amount annually. They all diversified, and their portfolios grew less risky as they aged. So, what made the difference in their ending wealth? The way they behaved during bear markets.

Reacting to market changes is normal, but try not to let your emotions take over. Instead, review your plan and make adjustments if necessary to stay on track of your goals.

*The investor earned the 3-month Treasury bill rate of return during the time out of the market.

Past performance is no guarantee of future results, and the opinions presented cannot be viewed as an indicator of future performance.