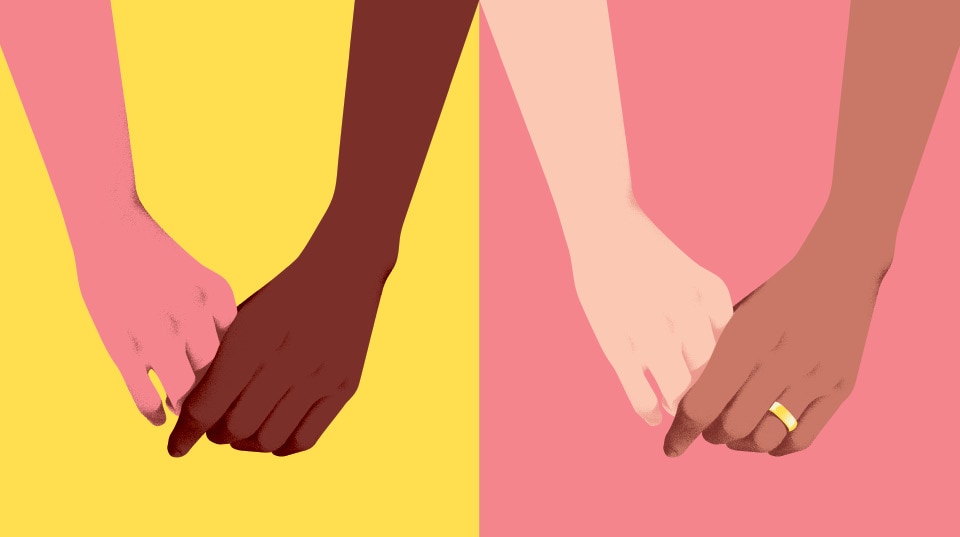 While more and more couples are opting to share a life together without officially getting hitched (see “Consciously uncoupled,” below), the unfortunate reality is that unwed partners have few of the rights afforded to spouses.

“Unmarried couples are little more than strangers in the eyes of the law, with no legal stake in each other’s estates, nor the right to make financial or medical decisions on each other’s behalf,” says Theresa Le, a senior trust services consultant at Charles Schwab Trust Company. “Particularly if you’ve combined your finances or have kids together, it’s urgent you make a plan to protect each other and your family.”

Even couples who eventually intend to wed should take precautions to protect each other in the interim. “I’ve met plenty of folks who think it makes sense to wait until their union is official, but you never know what life is going to throw at you,” Theresa says. “As soon as you’re committed to a future together, it’s probably time to commit to a shared estate plan.”

Here’s a look at certain rights and protections the law affords married couples—and what unmarried partners can do to create similar safeguards.

The marital advantage: The Health Insurance Portability and Accountability Act (HIPAA) Privacy Rule limits a medical professional’s ability to share your personal health information with others without express written consent. However, spouses generally are allowed to access each other’s records and make medical decisions on each other’s behalf.

The workaround: “Because of HIPAA rules, unmarried partners need to name each other in a legal document called a durable medical power of attorney before they can make medical decisions on each other’s behalf or discuss health care options with their respective doctors,” says Benjamin Fernandez, a senior trust services consultant at Charles Schwab Trust Company. “This applies no matter how long a couple has been together.” Similarly, you’ll need a financial power of attorney in place if you need to contact your partner’s health insurer to inquire about coverage or discuss the status of a claim.

The marital advantage: In most states, assets acquired during a marriage are considered jointly owned only if they are titled in both spouses’ names. “However, spouses may still have a right to claim part of the decedent’s assets through elective share statuses, which give to a surviving spouse a fixed fraction of the estate—typically one-third—regardless of the length of the marriage,” says Joseph Reyes, a senior financial planner for Schwab Intelligent Services. In New York, for example, a surviving spouse is entitled to the greater of $50,000 or one-third of the estate unless they are disqualified due to annulment, divorce, or other grounds.

For couples who reside in one of the nine community property states—Arizona, California, Idaho, Louisiana, Nevada, New Mexico, Texas, Washington, and Wisconsin—assets acquired during a marriage are considered jointly owned, giving the surviving spouse a legal claim to the property after the other spouse dies, even if the assets weren’t titled as joint tenants with rights of survivorship.

What’s more, spouses who inherit shared real estate from each other also benefit from what’s known as a step-up in cost basis—meaning the asset’s value is reset to the fair market value at the time of the first spouse’s passing. “That’s a potentially huge tax advantage,” Joseph says. “Should the surviving spouse eventually sell the property, any capital gains due would be calculated using the new cost basis rather than the original purchase price.”

The workaround: Benjamin recalls an unmarried couple who co-managed the large apartment building in which they lived during their nearly 40 years together. “Unfortunately, it was never titled as joint tenants with rights of survivorship,” he says, “so when the partner who owned the building passed away it went to his estranged son, depriving his surviving partner of both her home and her income.”

That said, titling real estate together can have unintended tax consequences. “When you add a nonspouse partner to the title of an existing asset, you’re effectively passing on the original cost basis to that person, which could result in a large capital gains tax bill for the surviving partner should they later sell,” Joseph says. One way around this is to title a home in one partner’s name and then place it in a trust that passes the property—with a step-up in cost basis—to the surviving partner at death.

It is now more common to have cohabited than to have married—a stark reversal from a decade earlier. 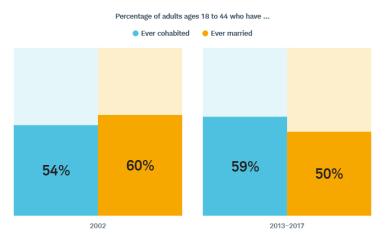 The workaround: “The loss of a partner’s Social Security benefit can be catastrophic to the survivor’s finances,” Joseph says. “In such cases, unmarried partners may want to purchase life insurance policies and name each other as the beneficiaries.”

The marital advantage: Retirement savings are one of the few assets that cannot be jointly owned, giving surviving spouses fewer rights if the assets are not expressly left to them via beneficiary designations. Be that as it may, if a married individual fails to designate a beneficiary of their retirement accounts, the assets will generally go to the surviving spouse via probate, the legal process used to validate a last will and testament and settle an estate—or, in the absence of a will, by intestate succession, in which a court distributes the deceased’s property according to the laws of their state, which tend to prioritize spouses in the hierarchy of potential heirs.
Married couples who live in community property states have another protection: One spouse cannot designate a nonspouse heir as the primary beneficiary of their retirement assets without the other spouse’s consent.

The workaround: The only way to ensure your retirement assets go to your partner is to name that person as the account’s beneficiary. “Fortunately, it’s one of the quickest and easiest tasks when it comes to estate planning,” Theresa says.

Schwab clients can log in to update designations for your Schwab accounts.

The marital advantage: Any assets that don’t pass directly to a surviving spouse via trusts, beneficiary designations, or joint tenants with rights of survivorship titles are subject to probate, with or without a will—though, again, even in the absence of a will, courts tend to prioritize spouses in the hierarchy of potential heirs.

The workaround: To ensure some of or all your remaining assets go to your partner, you must stipulate that in a last will and testament. “Otherwise, the probate court will distribute your assets in accordance with your state’s intestate succession law,” Benjamin says. “In most states, that means your parents, siblings, or other next of kin will inherit your assets, with no legal recourse for your partner.”

It’s also important to think about property that can’t be titled, such as artwork, jewelry, and items of sentimental value. “If you don’t account for it in your will, someone other than your partner might try to lay claim to it,” Joseph says.

Finally, it’s imperative to put your final wishes in writing. “Your partner may know what you want in terms of, say, funeral arrangements—but does your family?” Theresa says. Typically, such arrangements fall to the surviving spouse, but unmarried partners may be left out of the process entirely, creating conflict and confusion at a time of profound grief.

“The last thing you want is for the person you love to be excluded from such important decisions,” Theresa says. “And by planning your estates together, you can ensure that never happens.”